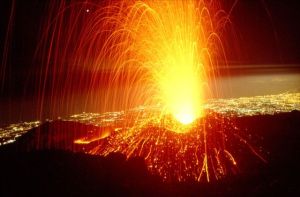 After an eternity of contemplation, Shiva started beating the drum. The drum beat gradually intensified and dissolved into a deep humming sound from within. Deep and long  AUM…….AUM…….AUM…..AUM… The ecstatic murmur from deep within drowned all the external sounds. The intensity of the internal murmur sucked in – all the senses, mind, intellect and ego. It was like a huge whirlpool. A whirlpool of molten lava. Everything fell into it and got dissolved in the powerful heat. The intensity and pressure was increasing. It can erupt any time.  Shiva’s drum beat intensified. He DANCED without moving. The inner dance!!! The dance of beingness!!! Each foot step shook the matter around and it exploded into pieces. The heat melted everything. The vapor pushed against the walls of creativity. All inside became RED with heat and pressure. Shiva beat his drum harder.Every cell of the universe was shaking.  The heat and pressure increased further. Shiva beat his drum harder…. the pressure increased further. Harder…..More pressure…..Then, IT EXPLODED!

The ash was thrown high into the air and the molten lava of samskaaras got spewn all around. Everything was in a completely dissolved state. It had lost all its identities. It could never come back and be reborn. While the lava flowed through the open head of the volcano, continuously, the soul merged back into the womb of Shiva. Complete dissolution. Nothingness. Exhaustion. “I” do not exist. This was the call from home. It was returning back home, empty handed, without any belongings, just as I had started the journey, once upon a time. The first birth and the eventual dissolution!!!

“Once upon a time”!!! I looked back. My past. I was in the womb of Shiva. It was peace and tranquility for a long, long time. It was eternity. Shiva’s womb is infinity.  Then, at some point, I started experiencing the same pressure from within. It was time to be born. While inside the womb, there was no time or space to measure the existence. Everything was inside the womb of Shiva. All of Me, which later became all of us. Everyone was inside the womb of Shiva. Shiva Himself was nothing but the womb. That time, again, I heard the familiar sound. The deep intensifying hum, AUM….AUM….AUM…. which obscured all the other sounds and the unmistakable rhythm of Shiva’s heart beat. The heart beat started intensifying and the humming began to be deafening. All sounds merged into the deep AUM. The whole womb was shaking. I experienced motion for the first time. Then the explosion happened. Brightness!!! I saw myself, everywhere. I was born!!! That was the first time that I noticed what we call space. There was space. And it required time to move through space. Time was born!!! I started exploring. There was relativity, for the first time!!! Relativity and creativity, walked together. Shiva seemed to be happy. He encouraged creation… He aided it whole heartedly. All his children who were spread far and wide swung into action. All imitated Shiva, the father. All became father of their own creation… Life is wonderful. Something is created every moment!!! Shiva just observed and smiled. He is such a kind father!!! Little did we realize that He was the creator, not us. Never it occurred to us, ever.!!!

First, I was curious. I liked to touch, feel, kiss, smell, lick, bite, taste, and listen. Everything was myself. All I could see was mirror images of myself everywhere. They were the mirror image of Shiva, our Father too. Perfect resemblance. All are one. Same entities. Staying apart  from myself, using relativity, I could do everything. I could express my creativity and expressions well. How could I do all that to myself, if I was the only one? So, the detachment from others helped my curiosity and explorations. The space allowed more options. Various highs and lows. Various shapes and colors. Various textures of existence. I loved it all. I was so preoccupied with my wanderings, that I forgot my home. And it was alright, as everything was mine and I was everything. Why do I need a specific home? I was at home everywhere. There was no space which is not my home.

We started addressing each other with different names, which reinforced duality and alienation. The truth of our oneness was getting erased from our mind. Then, I found that some parts of myself, that resembled myself even though were called other beings to exercise the relativity, have started collecting the scattered parts that they found interesting. I did not understand why they have to do that, when everything is ourselves  and everything is ours – isn’t it all there for us? Nobody can take anything away. Where will they take it away? From whom will they take it away, because all are one!!! Why do I have to save it only for myself?

When I found that all that I liked, others liked too, I also selfishly started to collect what ever I liked and I called them mine. To my utter shock, I saw that some parts of myself started stealing from me and others’ collections. I hated it. I cried. Why do you have to do that. It is all yours. It is all ours. Take it if you like. Still, possession lead to possessiveness. The fun vanished from the game. It became competition. Fights…WAR. Differences in opinions and forceful evacuations. The space that belonged to all was torn into pieces. I saw that my own parts started destroying my own parts. I cried. I saw many severed heads. I saw many shattered shells – bodies. Many massacres, in the name of possessions and even just to show strength over the other. It was not worth it. From absolute bliss of being Shiva to absolute ignorance and waste of being Shava (dead body). I wanted nothing to do with it. Let those who want to fight and conquer, do it. I decided to pack my bag and return to the womb of Shiva. There was no bag to pack. There was nothing worth carrying. I will miss nothing, I was sure.

I sat in a grave yard. Nobody else came with me there. Except the burning gross bodies and disembodied helpless souls that waged wars and craved for possessions, there was no one to give me company. There I saw the dance of death. This had a difference. This was the dance of vengeance, destruction. My father’s dance was the dance of ecstasy and bliss, dissolution and complete oneness. Shiva danced for unification. I craved for that dance.

I dived into myself, looking for my father. I waded intuitively through the thick darkness until I reached the mouth of the volcano. Should I jump in or return back? Suddenly, I realized the existence of free will. A further jump will mean complete annihilation of all my identities. A complete annihilation of my existence in relativity. The complete nullification. I turned back and looked. Blinding darkness. Nothing else. I looked ahead. The fiery volcano. I called aloud: “Father…. Have you forsaken me?” Without waiting for an answer, I dived into the pool of molten lava. I did not feel any heat or pain. I saw myself dissolving. Then, I heard the most familiar sound of the drums of my father. It soothed and comforted me. I am reaching my abode. My home!!! It intensified. It further intensified. Then the eruption!!! Blinding Brightness!!! I was HOME. 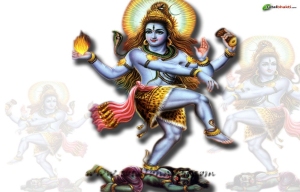 My beloveds, in the beginning, everything began with an internal explosion. The result was duality. In the very end of our individual life cycle, it begins with an internal explosion. The result is unity. Births and deaths exist between these. The final is unity or perfect awareness and being in completeness. Here, we are talking about the beginning of duality or relativity, regular births, deaths, consciousness shifts and final merger. So, it is both individualistic and cosmic. There are similarities. Distinct similarities. Just like a drop of water contains all the qualities of the ocean, our soul contains all the qualities of Shiva, Parabrahma, Father or Allah, what ever you want to call the eternal God. Hope you are able to see yourself and your true nature through the above text. Contemplate… Meditate. Love and only Love. M

In deep silence, in the depth of inner consciousness, the inherent rhythm of life, of heartbeat, reverberates. The cosmic dance begins. The entire cosmos rejoices and participates in the dance of Shiva. In the depth of extreme being-ness, the need for expression takes place. Shiva Dances, pumping up extreme rajas. Satwa paves way to diverse creativity and shift of energies. From the base of non-doingness, forms the expression of extreme action. The whole cosmos gets shaken up from inertia. Energy shifts and matter gets formed.

In the silence of beingness, energy gets conglomerated and with the external expression of cosmic dance, matter gets thrown out as a natural process. Extreme rajas destroys tamas – the evil in the path of spiritual evolution and puts everything into an action mode – only to fall back again into the being-ness of inherent guna-less state. External expressions are not remembered then. It is only the internal calmness and absolute peace. It is only the expansion and omni presence. It is only being-ness and nothing else.

When Shiva dances, the nature dances. Nature gets into the vibration of the one who dissolves. Nature echoes the universal heartbeat. Nature expresses the cosmic choreography. Every being dances in perfect rhythm and understanding. Everyone falls into perfect synchronization. There is no fear of dissolution. There is no fear caused by limitedness or limitations. There is only the relief of expansion. There is only the objectivity and peace of being-ness, or the bliss of being one with everything.

Shiva breaks into extreme rajas to shake up and speed up the creation. Then he dissolves back into being-ness. As easily he broke into extreme action, he retreats into extreme inaction or the state of non-doing. The whole cosmos merges into His consciousness. The heartbeat of the whole universe becomes his inherent rhythm. He carries the universe within himself.

Man carries his expression. Man carries his abode. Man cannot exist without his abode. Man cannot express without his abode. Man is the in-dweller and the temple is the abode. Shiva expresses the fundamental dynamism of creation of the universe through his dance. When the whole universe becomes His dance, He is everywhere, but nowhere. His omnipresence gets expressed through His duality as well as dissolution. The action and inaction are also symbols and signs of life. The being-ness and doing-ness are two sides of the same coin of existence. Without each other, there is no duality – there is no expression-able life.

Life is a continuous stream in the dance of Shiva. Shiva continues His dance, eternally. Before time began, Shiva existed. His Dance continues through the time into the absolute timelessness.

Books and Music by Mohanji